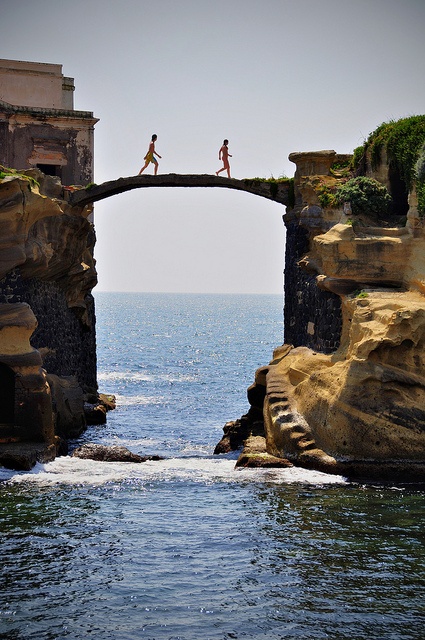 Naples and its mysterious corners

The island of Gaiola (Latin caveolae: small grotto), in southern Italy, located a few strokes off the coast of Posillipo, in the archaeological park namesake submerged in the Gulf of Naples, is one of those different places fascinating and seductive where our belief opens the door to imagination and anything seems possible.

The site is actually a group of two very small islands, one of which has a large residential villa and the second, which is a few meters, is uninhabited and is connected to the first by an enigmatic rock bridge arch.

Anyone who knows the story told on this island since the last century, not swim quietly to her! Visit the abandoned mansion Gaiola, is an experience that can only live with confidence if one is deeply skeptical, or if it is provided with a protective enormous faith.

In the early nineteenth century, Gaiola Island was inhabited by a hermit, nicknamed "The Magician", who lived on alms of fishermen. And a little later start construction of the villa that characterizes one of the islands today. The actual date of its construction is not known with certainty, but in 1926 was owned by the Swiss professor Hans Braun; and thereafter became known its dark history.

Professor Braun had built a cable to connect the island to the beach. One night, however, the cable car was struck by lightning while carrying his wife, Ellen Von Parish, who fell overboard and drowned. The husband was found the next day, had committed suicide.

A friend of both, Otto Grumbach, who was a guest in the house at the time of the accident, committed suicide some time after returning to Germany.

Soon the island was popularly recognized as a cursed island; and the events that followed further fueled this legend.

The next owner, Maurice Sandoz, owner of the famous pharmaceutical company, who lived on the island until 1950, ended in a psychiatric clinic where he killed himself convinced that end in bankruptcy.

The next owner, the German Baron Karl Paul Langheim a steel industrialist, wanted to clean the bad reputation of the place and early 60s, began organizing numerous parties and social gatherings: it ended in ruin.